Donut Hockey is a young, attractive team sport which connects the advantages of hockey, ringette and floorball to a quick team sport with a lot of emotions and action. It hardly needs any technical skills to control the ring with the stick, therefore, beginners can also show attractive moves and play efficiently in the team after a short time. However, the possibilities with the devices are nearly boundless, so even advanced players always discover new challenges. Donut Hockey is directed to every age and to men and women – the big number of female ringette fans in Canada give proof of this in an impressive way.

IN A HURRY?: 30 SECONDS SHORT TRAILER

The court must be limited on all sides. Floorball boards suit best, however, the gym corners can also easily be separated with long benches. The field size corresponds to the small field in floorball. If there is not enough room, Donut Hockey can also be played easily in a smaller hall or in a gymnastics hall. The minimum measurement for competition sport is 10x20m. The goal area is a semi-circular zone of 2.4 m in diameter. Further there is a center circle, the goal lines, a centre line and 5 Crush points. If no suitable ground drawings exist, they can be installed with a special line adhesive tape. The easy removable tape is available on www.burnershop.ch. Patient persons willing to clean can also use concealing or stack tape. 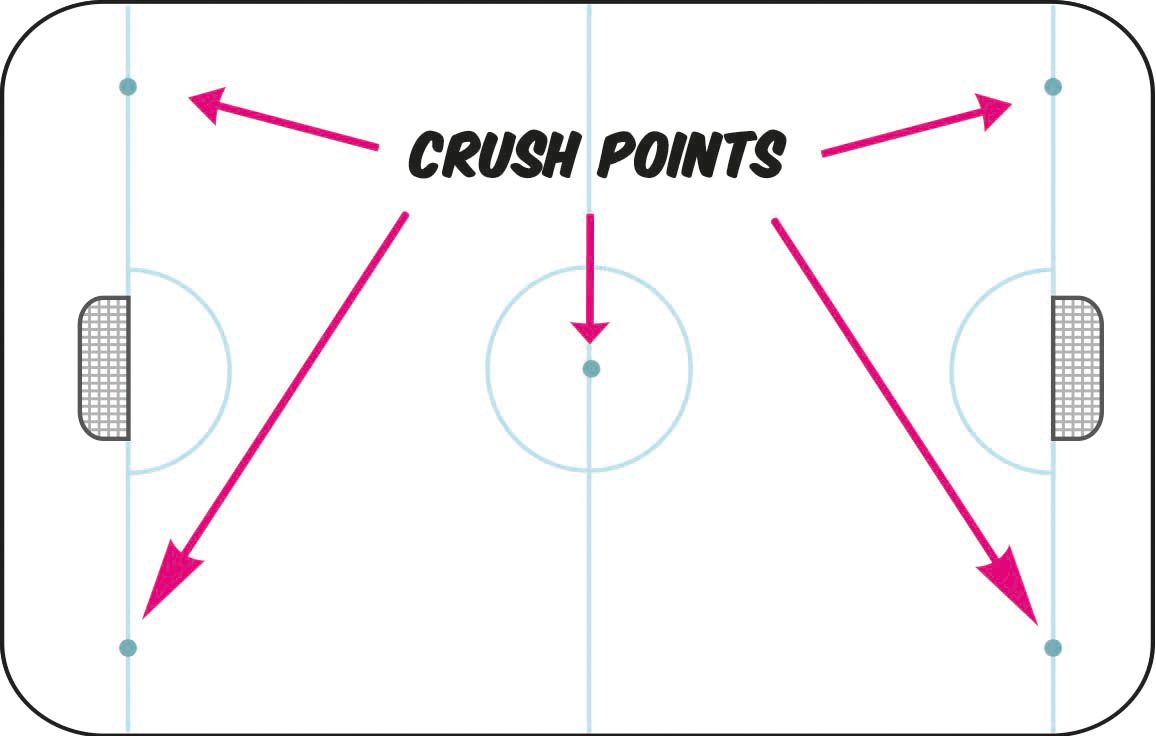 A team consists of 3 players and 1 goalkeeper. The donut must be played into the opposing goal with the help of the stick.

At the beginning of a game and after every goal there is a “crush”. This works like a bully in hockey, except that the donut is thrown flat over the ground.

If the donut leaves the field, a free play is given for the opposing team where the donut has left the field, with a distance of max. 30 cm from the boards.

With the freeplay the opponent must keep a distance of 2 m, until of the Donut is moved.

If a sure chance to score is prevented by an infringement, a penalty kick is given. The player starts in the middle of the centreline, runs towards the gate and shoots. It is forbidden to move besides or backwards. The goalkeeper may not leave the goal area.

A player may only have ground contact. with the feet and a knee. It is forbidden to block the ring by throwing yourself into the line of fire or in the run way of the opponent.

A player may stop the donut with the foot and then play with the stick. High passes/shots may be taken with the body or may be hit with the hand to the ground. The donut may not be blocked. If this happens, nevertheless, a free play is given for the opposing team at the nearest crush point.

Play with the stick

The stick may be used only to play the donut. Any hitting, bumping, checking or hooking of the opponent with the stick is forbidden. Furthermore it is forbidden to throw the stick.

Checks are only allowed to the player who leads the Donut. Checks with shoulder and hip are permitted. The application of stick, head, elbow and knee as well as checking from the back and against the boards are forbidden, as well as exaggerated body application and checking with approach.

For smaller offences (e.g., out, ground play, to long blocking of the donut) there is a free play given, by prevention of a clear chance to score a penalty kick, heavy fouls are punished with 2-minutes on the bank.

HOW TO GET ALONG?

More infos about the game

Facts and details about the material

Yes, I want to go and buy that stuff.